2018 has ended up being a pretty solid year for anime with a wide variety of shows from different genres and a lot of surprise hits. We saw Go Nagai become a household name in anime fandom with the success of Devilman Crybaby. A Place Further Than The Universe became such a beloved hit to make it into the top ten international shows of 2018 in the New York Times. We also had a lot of popular returning sequels like My Hero Academia, Attack on Titan, and Sword Art Online, and some shows that finished up their run like Dragon Ball Super. With so many unique shows, it’s hard to pick which ones were the best. My list is not the definitive be all end all top anime of the year list. These are just a few of my top five favorite shows that I personally got the most enjoyment out of and I hope you’ll like them too. This list will only be a brief description of what I enjoyed about these shows as I still plan to write up full length individual reviews of each show at a future date. 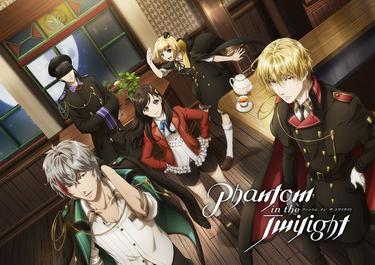 5. Phantom in the Twilight- It was really hard for me to decide between Phantom in the Twilight and Zombie Land Saga, but I was really surprised by how much I really got into this show. It quickly became the one show of the summer 2018 season where I really looked forward to watching it every week the most. The main character, Ton, was easily one of my favorite anime heroines of the year with how strong and independent she was and her relationship dynamic with all the supernatural beings at Cafe Forbidden, especially with her main potential love interest, the vampire Vlad. And she was always quick to take charge of whatever situation she found herself in. I was always impressed with how the show successfully avoided a lot of the potentially problematic melodrama you might associate with a reverse harem anime. It always kept me on the edge of my seat waiting to find out what happens next and it’s just a really fun blend of exciting action and romance.

4. That Time I Got Reincarnated as a Slime- I’m a bit biased as someone who typically enjoys a lot of isekai anime but I feel like That Time I Got Reincarnated as a Slime is a really special show. The big twist of this show is that the main character is reborn in the fantasy world as this slime, Rimuru, as opposed to the usual blank slate OP otaku. Rimuru really has to go through a lot of trial and error to learn how to use his powers and I like he gains a lot of his powers from the friendships he meets with various fantasy beings. What really makes this series so special is the sincerity of the writing and the characters. Rimuru truly respects and treasures his friendships and I love his close bonds he forms with the Goblins and the Direwolves. The JRPG-style fantasy world building always feels fascinating rather than boring and the animation is very impressive. If you want to see what one of the best examples of the isekai genre is like, I highly recommend That Time I Got Reincarnated as a Slime.

3. Revue Starlight- This was a series that really surprised me with how impressive it was. Going in, I knew nothing about it other than it was about Takarazuka and it was based on a mobile game, so I just thought it was going to be a standard slice of life show, and that was how it started at first. The moment we meet the talking giraffe and we see Hikari thrown into the surreal world of the Starlight Revue stage battles, that’s when I knew this show was going to be something special. The show always gave you a lot to reflect on with the various complex relationships between the girls and their own goals for becoming the Top Revue. The supernatural surreal elements always added in the right amount of mystery to the story that kept you coming back for more to find out what was happening. And the show had some of the most unique art direction that I’ve ever seen in an anime series and was a visual feast for the eyes. While not my number one favorite of the year, if you can only watch one anime from 2018, I definitely recommend checking out Revue Starlight. I also already have a full review of this show posted on my blog if you want to learn more about the series.

2. Cardcaptor Sakura Clear Card- The original Cardcaptor Sakura has long been a personal favorite of mine so I had mixed feelings when a sequel was first announced. The original just seemed so perfect and complete that a sequel didn’t seem necessary. I was pleasantly surprised at how much I enjoyed the Clear Card anime and I didn’t need to worry. The Clear Card arc perfectly recaptured the spirit of the original classic Cardcaptor Sakura that so many of us anime fans grew up with. Sakura, Syaoran, Tomoyo, Kero, Meiling, and the others are all exactly as we left them so many years ago and we have new additions with Akiho Shinomoto and her mysterious butler, Kaito. While the jury is still out on Kaito for me, I quickly warmed up to Akiho and her cute friendship with Sakura and I enjoyed how quickly she fit in with the rest of Sakura’s friends. Everything else felt just right and just like the old show. From Yamazaki’s habit of telling lies, to Kero’s obsession with food, and Tomoyo’s never ending quest to always film Sakura in her battle costumes, the show never lost the magic formula. With new modern animation, the show has never looked better and there’s plenty of new mystery with the new Clear Cards and the new visions haunting Sakura. The finale definitely left me hungry for more. If you’re a long time Cardcaptor Sakura fan, the Clear Card arc is more than worth it.

1. Laid Back Camp- This might not have the most complex story or the most philosophical message but it was the anime I got the most enjoyment out of in 2018. The character development ended up being a lot more thoughtful than you would expect from a show simply about kids going camping. I thought it did a good job of portraying a group of school friends who all have varying personalities and how they respect each other’s differences. The main character, Rin, is very introverted and shy and prefers to camp alone than with a big group. But her friends at school still try their best to be inclusive of her through simple gestures like texting each other when they’re at different campsites and sharing photos while respecting Rin’s boundaries. Nadeshiko is one of the few that can break through Rin’s shyness with her energetic love of camping, and she develops a close friendship with her, and Rin even takes her along camping throughout the show. But the series is always careful to avoid showing Rin’s shyness as a personal flaw that needs to be fixed and instead embraces the differences between the girls. I was also surprised at how much I actually learned about camping through the series and the cooking scenes were always a joy to watch. I was also impressed at how consistently beautiful the animation was and how they really brought to life the forests and mountains of Japan. It might not be the deepest or most complex anime, but if you want a show that’s just about a group of friends exploring a hobby and having fun, Laid Back Camp will always put a smile on your face, and that’s why it was my favorite anime of 2018

I've been a devoted anime fan since I started watching classics like Sailor Moon, Voltron, and Robotech, when I was in middle school in the mid 90s. I'm open to most any anime genre as long as it's entertaining. However, my personal favorite genres are sci-fi, fantasy, mecha, and monster battle anime like Digimon, Pokemon, and Yugioh. Some of my favorite anime directors are Satoshi Kon, Mamoru Hosoda, Makoto Shinkai, Mamoru Oshii, Hayao Miyazaki, Kunihiko Ikuhara, and Junichi Sato. My personal favorite anime series is Sailor Moon. It's hard to decide on just one favorite anime film but I love Akira. Perfect Blue, and Ghost in the Shell. Outside of anime, I'm also a fan of Nintendo video games, and I enjoy sci-fi, fantasy, films and books, and animated films in general. You can find me on Twitter at https://twitter.com/CCTakato View all posts by cardcaptortakato