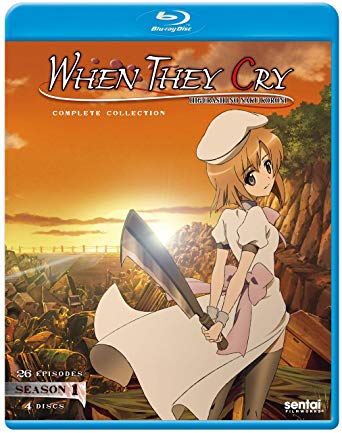 Keichii Maebara has just moved into the simple and quiet country town of Himizawa. He spends his days with his friends at school as an ordinary teenager. But the more Keichii learns about Himizawa and his friends’ lives, the more he learns all is not what it appears to be on the surface. Can Keichii solve the mysteries of the village and escape a sinister curse?

The When They Cry anime and games have been a popular franchise for several years and I’ve always been meaning to watch it eventually, but I never got around to it. With the Halloween season upon us, it felt like the perfect opportunity to finally start watching it. The series has potentially interesting concepts but I had mixed feelings of how the anime adaptation handled it. I’ve never played the games or read the manga and light novels, so I’m focusing entirely on the anime in my review. Long before School Live became a thing, When They Cry was one of the earlier examples of an anime series that mixed in moe character designs and tropes with horror themes to shock the audience with the extreme contrasts.

The series starts off as a typical slice of life club room show as the audience follows how the main character, Keichii adjusting to moving to the small town of Hinamizawa, and his interactions with his friends at school. Keichii starts off as your typical blank slate, nice guy protagonist that wants to get along with everyone. Rena loves to explore the junk yard after school to find what she considers hidden treasures. Mion is the older, dependable big sister of the group but she still relies on Keichii to help her study in school. Satoko clashes with Keichii a lot with her mischievous traps but she’s also very reliant on her friends. Rika is more mature in spite of her younger age,words and plays an important role as the shrine miko and heir.  As the story progresses, we learn more about the sinister secrets the village is hiding and that there’s more to these characters than what initially meets the eye. What I thought the show did well was setting up it’s mystery and slowly teasing out the reveals over each arc. Every arc focuses on a different character and we see different sides to the entire cast based on which point of view the arc is focused on. One of the most difficult aspects of adapting a visual novel to an anime format is how to include all the routes in the game without feeling repetitive or trying to cram everything into one arc. The way When They Cry resolves this by always resetting the story after each arc allows the narrative to build on what we’ve learned before while still discovering new aspects to the characters and the mystery. I thought the show was successful at keeping it the nature of the village god’s curse ambiguous and building up suspense around the curse, and the audience is never sure even at the end of the first season if the curse is truly supernatural or not. Where I had the most problems with the show was how heavily it employs torture as it’s primary means of being terrifying. After years of how much the show has been hyped up by fans as one of the more popular horror anime, I was expecting more, but I found all the torture scenes to be more of a chore to get through than anything else, and it just drags the pacing of the story down for me, as I just want to move on and learn more about the mystery. At first I thought the show did a good job of keeping you on edge because you never knew when they would suddenly shift to the darker more violent plot and it kept you guessing how the characters would react. After a couple of arcs, it does end up feeling a bit more repetitious and it loses any of it’s shock value effect because they just constantly barrage you with the violence and don’t shake up the formula enough. Although the first season completes the plot of it’s final arc, it doesn’t wrap up any of the main story line and you still feel like you’re left in the dark about what’s really going on and what the nature of the curse is. The animation suffers from the same problem that a lot of mid 2000s anime does in that it’s done in a very dated digipaint style that doesn’t really hold up well. The character designs are done in a pretty typical moe style, though I feel like it works for the show’s benefit of shocking the viewer with the contrasts between the cutesy moe style and it’s darker themes. The music was very effective at being suspenseful, especially with the opening theme, and I thought the ending theme added an appropriate melancholy tone. The series is based on a visual novel series created by Ryukishi07 for the doujin circle, 07th Expansion, which was based on an earlier rejected script for a play he had written, and was heavily inspired by the moe visual novel games from Key that Ryukishi07 was a big fan of. The anime was directed by Chiaki Kon for Studio Deen. Kon is one of the few prominent women directors in the anime industry and is also well known for directing the Junjo Romantic boys’ love series and more recently the third season of the Sailor Moon Crystal reboot. The music is composed by the famous Kenji Kawai, who is most well known for his work on Mamoru Oshii’s Ghost in the Shell films, Patlabor, Ranma 1/2, and the original Japanese version of The Ring horror film series. If you’re a big fan of horror anime and visual novels, you’ll likely find something interesting about When They Cry. But if you’re new to horror anime, I think there are other better options to start with that will give you the best of what the genre has to offer. I should also warn that When They Cry is not an easy series to watch as it does contain a lot of graphic violence and torture which might bother some viewers if you’re sensitive to that kind of content. I give When They Cry season one a three out of five star rating. When They Cry season one is currently licensed by Sentai Filmworks and is available on Blu Ray. It’s also available for streaming on Hulu, Yahoo View, and HiDive

I've been a devoted anime fan since I started watching classics like Sailor Moon, Voltron, and Robotech, when I was in middle school in the mid 90s. I'm open to most any anime genre as long as it's entertaining. However, my personal favorite genres are sci-fi, fantasy, mecha, and monster battle anime like Digimon, Pokemon, and Yugioh. Some of my favorite anime directors are Satoshi Kon, Mamoru Hosoda, Makoto Shinkai, Mamoru Oshii, Hayao Miyazaki, Kunihiko Ikuhara, and Junichi Sato. My personal favorite anime series is Sailor Moon. It's hard to decide on just one favorite anime film but I love Akira. Perfect Blue, and Ghost in the Shell. Outside of anime, I'm also a fan of Nintendo video games, and I enjoy sci-fi, fantasy, films and books, and animated films in general. You can find me on Twitter at https://twitter.com/CCTakato View all posts by cardcaptortakato